In their routine work, embedded system developers often have to launch two or more diverse operating systems (OSs) on n-core systems-on-chip (SoCs). The OSs usually include Linux and a specialized real-time operating system (RTOS). In this case, Linux has to handle the burden of heavy protocol stacks, while an RTOS manages real-time tasks.

One of the main tasks related to such a system structure is to provide a mechanism for communication, e.g., inter-core data exchange. Developers can solve the problem by using shared memory and inter-core interruptions by writing their own interaction interlayer and porting it to different OSs.

To bring this application programming interface (API) to the standardized format, the Multicore Association (MCA) developed and released the first version of the specification Multicore Communications API (MCAPI). The second version soon followed.

OpenMCAPI, the library in question, is based on the MCAPI 2.0 specification developed by Mentor Graphics. It has an open-source code under a free Berkeley Software Distribution (BSD) or GNU Public License (GPL) license. The OpenMCAPI source code provides brief information on launching and porting. The OpenMCAPI library initially enables developers to work under Linux using a virtual transport or shared memory, but only on the mpc85xx and mv78xx0 platforms.

Figure 1 shows the proposed structure of communication between Linux and the RTOS through OpenMCAPI with division into abstract levels. MCAPI Generic is an implementation of the external MCAPI API. OS Layer is part of the MCAPI Generic level, which contains a code specific to the OS. Described in the file libmcapi/mcapi/linux/mcapi_os.c, this part implements the work of a system thread, mutexes, queue management functions, and lockable delays.

Figure 1. Linux and RTOSs can use OpenMCAPI to communicate via shared memory.

Transport Generic is an abstraction level that provides a mechanism for shared memory at the user space level. Represented by the files libmcapi/shm/shm.c and libmcapi/shm/linux/shm_os.c, it implements shared memory mapping. It also sends notifications and receives messages using core system calls. The file libmcapi/shm/sysv.c is used on the platform without the support of transport shared memory to virtualize the transport required for OpenMCAPI demonstration and testing.

Enabling transport virtualization eliminates the need for an OS-specific driver. Instead, a Linux kernel module that provides direct access to the hardware from the user space represents the OS-specific driver. Located in the folder libmcapi/shm/linux/kmod, the module includes the implementation of API interrupt handlers and user space (shared memory mapping, sending interrupts), which are implemented in the mcomm.ko kernel module, and hardware-specific code for a specific platform (mpc85xx or mv78xx0).

To fully understand the mechanism of communication through transport using shared memory, which is implemented in the OpenMCAPI library, we should examine the inter-core signaling mechanism and the structure of data in shared memory.

With an implementation of the OS-specific driver, the OpenMCAPI library uses the MSGRs mechanism for this platform. Now, let’s consider the structure of the data contained in shared memory (Fig. 2).

Figure 2. The structure of the data in the shared memory is a collection of buffers.

We can divide the shared memory region into two blocks, depending on the use of space. The first block is the SHM_MGMT_BLOCK region represented by the following structure:

The second block is the data region, which includes SHM_BUFF_COUNT (128 by default) SHM_BUFFER structures. This area is used directly for the storage of transmitted data. The SHM_BUFFER structure consists of an MCAPI_MAX_DATA_LEN size array and an additional element management structure. Before we examine the porting process, though, we should introduce a block chart of the low-level mechanism of communication through shared memory (Fig. 3). 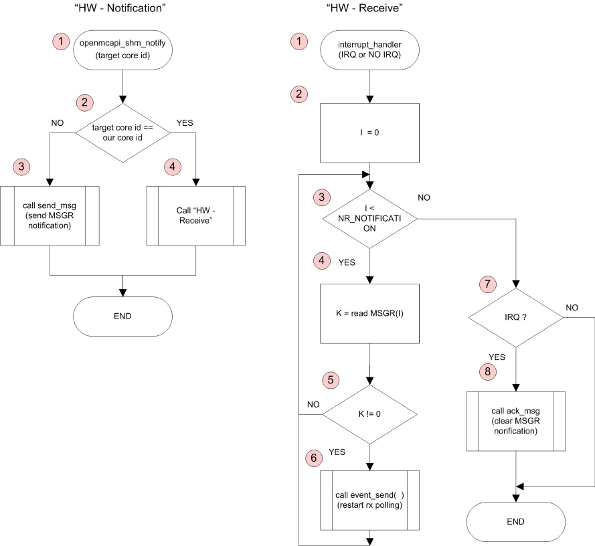 Figure 3. The SDL charts show the low-level mechanisms for communication through shared memory as implemented in OpenMCAPI.

HW-Notification describes the process of sending a notification to the remote or current core. The function call accepts the identification of the core for which the message is intended (the function OpenMCAPI_shm_notify). If the notification is intended for the remote core, “target id,” a deleted message is generated through the MSGRs mechanism with the data field value equal to one (Block 3) or is an explicit call to the interrupt handler interrupt_handler (“HW-Receive,” Block 4).

HW-Receive describes the process of receiving a notification from the remote or current core. Interrupt_handle is an interrupt handler set to operate when receiving a message through MSGRs. It is also used for an explicit call. Blocks 2-6 show how the status of all MSGRs messages is checked. If the MSGR message data field is not equal to 0, it leads to unlocking the thread, which processes the data in the shared memory area. Blocks 7-8 show how the call site of the interrupt handler is checked (“interrupt_handler”). If the call was interrupted, the MSGR message flag is reset.

RTEMS is a full-featured RTOS with an open source code. It supports multiple open standard APIs, Portable Operating System Interface for Unix (POSIX) standards, and BSD sockets. Designed for use in space, medical, networking, and many other embedded devices, RTEMS provides a wide range of processor architectures such as ARM, PowerPC, Intel, Blackfin, MIPS, and Microblaze. It contains a large stack of implemented network protocols, particularly tcp/ip, http, ftp, and telnet. RTEMS provides uniform access to RTC, NAND, UART, and other equipment.

Since the P1020 (powerpc, 500v2) is the target platform and the porting was performed to the RTOS allowing for the absence of division of the kernel/user space, there is no need to write libmcapi/include/arch/powerpc/atomic.h or libmcapi/shm/rtems/kmod/. Moreover, there is now no need to implement the OS layer because RTEMS supports POSIX-compatible calls. The files mcapi_os.c and mgc_mcapi_impl_os.h were simply copied from the implementation for Linux.

mcapi_status_t OpenMCAPI_shm_os_init(void): This function creates and starts a low-level data reception thread. It’s implemented by calling the functions rtems_task_create and rtems_task_start. The source code is:

mcapi_status_t OpenMCAPI_shm_os_finalize(void): This function stops the low-level data reception thread. It is implemented by calling the function rtems_task_delete. The source code is:

We should pay special attention to the implementation of the function of a low-level reception thread, mcapi_receive_thread. (See the source code above.) When you start the thread by calling the function rtems_event_receive, it switches to event standby mode (implemented by the event mechanism available in RTEMS). Then when the startup event arrives, it is sent to the interrupt_handler (Fig. 3, HW-Receive chart). It processes changes in shared memory (calling the internal function OpenMCAPI - shm_poll ()) and places a provisional lock on it. After this, the thread returns to standby mode.

The table shows the results of communication between Linux and RTEMS through OpenMCAPI. The Freescale P1020RDB-PB development board with the installed processor P1020 (two cores) serves as a testing stand. The core frequency is 800 MHz, DDR2 is 400 MHz, and CCB is 400 MHz. We launched Linux/RTEMS on the cores 0/1 respectively. It was a two-way exchange and we measured the time required for 10,000 two-way sendings.

We can conclude that the OpenMCAPI library is an excellent implementation of the MCAPI specification. It has a clear structure of the source code, making porting easier. Moreover, it includes porting illustrations (PowerPC and Arm platforms), a free license, and a capacity sufficient for most applications.