A sound wave is a wave of air compression and rarefaction. If you use speakers to emit a wave with the same frequency and amplitude but with inverted phase, they weaken each other. This is the operating principle of ANC (Active Noise Control) shown in Figure 1. Active Noise Control (ANC) is a technology that can significantly reduce noise levels, especially if the sound source is well localized. ANC demonstrates even better results, if the noise spectrum has periodic components. 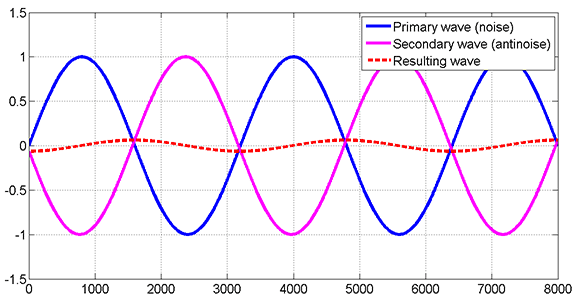 One of the obvious applications of active noise control systems is ventilation — ventilation devices, hoods and compressors. A ventilation system with a mechanical drive is noisy, which may have an adverse effect on people who spend a lot of time on such premises. An example of such premises may be “clean” rooms where people have to work long hours. The principle of active noise control is not new: it was invented by P. Lueg as early as in 1936. However, in those times there were no technical facilities to find a modern application for an ANC system. Until recently the problem of ventilation noise was solved only by installing sound-absorbing structures, sound screens and various resonators. Now we are developing a scalable ANC ventilation system.

Listen to the demo file with ANC results:

This fragment of an audio file shows the results of modeling an ANC system. At first it is turned off and fan noise is clearly audible. Then the system is turned on and the noise decreases - periodic components disappear from the spectrum. In the above example, modeling does not include passive sound proofing, which can further improve the results.

Low-noise rackmount server cabinets is another high demand product, which can be a good application of the ANC system in conjunction with passive acoustic means. This symbiosis of the two principles is highly effective because it suppresses noise at all frequencies: ANC is most effective at low frequencies, while passive sound insulation - in a mid- and high-frequency range. Generally speaking, passive sound insulation can also be effective in a low-frequency range, but the thickness of soundproofing material should be no less than half the wavelength. For example, a drone with a frequency of 50 Hz can be effectively cancelled with a layer of soundproofing material about 3 m thick, which is an unrealistic requirement for a server cabinet. In contrast, an ANC system is much smaller and also does not prevent the air flow to ventilate the inside of cabinets.

A growing field of ANC application is windows and soffits. If a house is located near a highway, constant noise can have a detrimental effect on the health of people living in it. So our future plans include adaptation of ANC for installation in windows and soffits. The popularity of these windows cannot be overestimated – just imagine a summer night when you do not want to open the window because of loud noise in the street but it is also not fun to sleep in a room with an air conditioner on.

The development of ANC for use in cars and trucks is one of our nearest goals. Basically, noise in a car comes from the noise of tires touching the road surface, which is transmitted through the suspension and the body. The complexity of any noise control system has to do with the necessity of placing speakers in such a way that their sound wave would interfere with the ambient noise in the places of people’s location. We are planning to develop a system that would be introduced in major car-making companies, as well as used by customizers.

Do you want to implement active noise control technologies in your project?

Drop us a line about your project! We will contact you today or the next business day. All submitted information will be kept confidential.