An analysis of the possibility of outsourcing electronics development in the CIS States, based on statistics and the authors personal experience of working in the high-tech markets of Russia and Belarus. In recent years, the CIS States have seen a successful development of a new type of companies developing custom-made electronics - independent design houses or centers (IDH / IDC). This business model emerged in the world’s market in the early 2000s, but in the post-Soviet countries, the evolution of the electronics industry was ten years behind (see Picture 1).

This is explained by the fact that an independent IT industry, with the prospects of integrating into the world economy, appeared in the CIS States only in the early 90s, after the collapse of the Soviet Union and with the rise of private business. With the growth and development of software and electronics companies in Russia, Belarus and other East European countries, global companies began to place their outsourcing orders here. They were not embarrassed by the political and economic situation in the area because they were aware of the old post-Soviet engineering school and understood that it was better to transfer certain types of development to the CIS region, such as high-tech projects, complex algorithms, etc.

Today no one is surprised by the success of local IT companies at the global market. Giant software development outsourcing companies, such as EPAM Systems and Luxoft, are highly regarded in the international rankings and are popular with customers in the EU, the US and Canada. Today design houses of these companies are distributed worldwide.

The same processes are observed in electronics, though at a slower pace than at the software development market, which is a global trend. 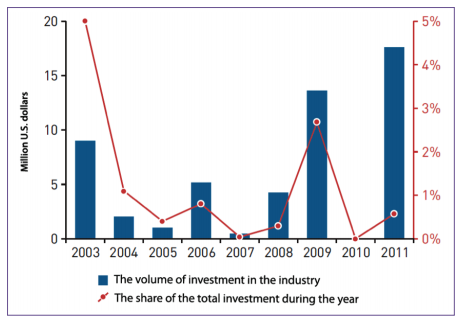 The first sure steps in the

The market has seen the rise of competition, but so far we cannot say that the market is fully formed. At present, we have very limited information on the situation in the industry. So the scale of development by private companies, the geography of their design houses and other features of the market map remain understudied.

However, this situation has its advantages. The world of business, which appeared in the early 90s, began to invest in new high-tech projects in the field of electronics (see Picture 2), with a special focus on telecommunications. Local engineering teams implement very sophisticated projects in this area, designing devices based on more stringent requirements than those of EU telecom operators.

In recent years, there have been a lot of interesting and challenging projects in a variety of areas, such as telecommunications, automation, automotive electronics, consumer electronics, as well as military and government orders.

Companies and teams of engineers who have previously worked in closed or partially closed markets, with government contracts and projects in telecommunications, are now breaking into open markets of free competition, bringing their knowledge and expertise into the field of consumer electronics, automotive electronics and automation.

This trend in expert development holds a good potential for companies from the EU and the US to set up effective partnerships with companies specializing in certain areas. Such engineering teams are used to working in closely with the customer (they have gained this experience working on closed military research projects and government orders).

CIS engineering companies are quite competitive at the world market, though only in their applied areas of expertise. Meanwhile, they are not yet able to promote themselves in the West because of underdeveloped marketing in the CIS business world.

Another special feature about CIS electronics developers is creating and implementing complex business models. Unlike software development outsourcing, electronics has much less large projects. Thus, local companies have two options for their growth and development – they can either continue to work at closed domestic markets with limited competition, or enter the world market and become electronics design houses with a wide range of services. The second option requires ambition, experience and knowledge and about five years of time. It is this choice that helps companies integrate into the world market and work on the cutting edge of technology.

Independent design houses provide electronics design outsourcing services, prepare documentation for batch production of the finished product and then give the customer the agreed level of property rights to the development. In addition, they invest their own money in the creation of hardware and software platforms (reference design), the development and introduction of new technologies, as well as other intangible assets, which are then provided for their customers on varying conditions, from licensing to full sale.

Electronics design houses use flexible patterns of cooperation with customers, integrate into industry ecosystems and build partnerships with developers and suppliers of electronic components. Industry cooperation is much more important for them than it is for companies dealing exclusively in outsourcing services.

So design houses seek a larger output per worker, not only through outsourcing, but also through additional activities:

A combination of own and custom development enables IDHs to take part in cutting-edge technology projects, expanding engineers’ expertise and allowing them to borrow international experience, to explore new electronic components and technologies before they appear in commercial projects of global vendors. This feature about design houses is a major advantage for customers that can outsource through design houses not only individual tasks, such as the development of hardware and software elements, but the whole project of developing a turnkey electronic product, up to launching it into mass production and technical support throughout the life cycle of the device.

Moreover, customers can use finished developments by design houses, software and hardware platforms (reference designs), to accelerate the implementation of their projects and reduce the time-to-market for a new electronic product.

Speaking of the most important advantages of electronics design outsourcing through design houses, customers generally list the following:

However, it is important to bear in mind that a combination of own and custom development can create conflict of interest between the design house and its customers.

Here is one typical example: a design house sells a limited license for a finished software platform to Customer A that specifies its requirements for improving the platform and contributes to its development as a competitive product market. Then Customer B asks the design house to sell him a license for this extended and revised version, which gives it a competitive edge in the time-to-market for the same or a better product that will compete with Customer A’s product.

The design house can find a way out of the situation in various ways:

To reduce these risks and provide additional security guarantees, it is important for customers to come to an agreement with the design house on all possible aspects of intellectual property rights for the development. Practical cooperation between businesses is based on the following patterns:

While using any pattern of cooperation, it is important to pay special attention to a document called the Non-Disclosure Agreement (NDA), which will spell out clearly all aspects of handling confidential customer information.

Let us consider a list of standard services which design houses can offer their customers:

Opportunities for cooperation with design houses are used not only by electronics design customers, but also by other players in the market. Thus, chip vendors are testing and implementing their chips in devices designed by IDH engineers. Also, design houses create a software development kit, OEM modules and reference designs, as well as integrate in the ecosystem for the development of a component base of chip vendors.

For startup and their investors, IDHs create electronic devices, manufacture prototypes and provide counseling on the technical feasibility of various solutions.

Russian design houses have their own niches in the industry. So this business model will be popular with market players; it will keep developing and changing. Currently, these companies are creating devices for a great variety of niches:

The choice of an area of competence for Russian design houses depends, among other things, on the customer’s country of origin. For example, firmware development outsourcing services are very popular with customers from countries where prices offered by local experts are comparably higher, for example, Israel, the US and Germany.

Licenses for technologies or software platforms are purchased in areas where these developments are applied in a developing market. This can be seen in the distribution of digital television. Europe, coupled with Russia, is catching up with the United States, followed by developing countries (for example, African countries). Accordingly, design houses can predict where and when certain types of licenses will be in demand.

Thus, design houses in the CIS countries are in high demand today both in the domestic market and with companies in the EU, the United States and Canada. Small teams of private design houses work successfully in their niches. They are motivated to implement ambitious projects for the global market and can help the customer make a technological breakthrough. The overall picture of business is approaching more intellectually intensive development. Companies build personal development strategies and become more integrated into the global market. They understand that competitiveness on the world stage is much more important than lobbying for government orders and working in closed markets.