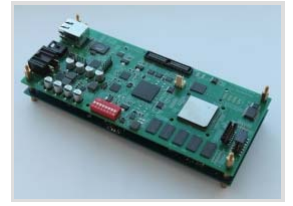 Today the SDR technology enjoys a very different status than it had back in 1984 when the term software radio (software-defined radio) was first coined in the E-Systems laboratory. Until recently this technology was reserved mostly for enthusiasts and the military.

Today, however, SDR is one of the priorities in the development of wireless communications and it is supported by international and national programs and associations such as Wireless Innovation Forum, French CONTACT Programme, Italy's Forza NEC Battlefield Command System, ESSOR, EULER, US military's Joint Tactical Radio System (JTRS).

Many experts believe that this technology will become a new standard for the telecommunications market. A number of successful commercial projects using SDR-based and cognitive radio equipment have already been implemented. Examples include projects by the communications equipment manufacturers Harris and Alcatel Lucent; Firetide, a developer and integrator of hardware mesh networking; xG Technology (a successful startup that implements cognitive radio in wireless networks); Promwad Innovation Company (an independent electronics design centre), the developer of a universal SDR platform. This rapid change is explained by several factors. The primary factor is the interest of the major manufacturers and consumers of telecommunications equipment since the introduction of devices with SDR support helps improve efficiency, reduce upgrade costs and reduce the cost and the time of introducing new communication standards. Another factor is the development of a modern element base: ADCs / DACs providing high speed and good dynamic performance, multi-standard broadband transceivers with programmable features, high-performance communication processors with integrated specialized accelerators, etc.

Unfortunately, our local Eastern European market of SDR-based products is closed due to its specificity. Engineers and technology experts have difficulty finding new information on this topic, which is the reason why any data on new developments are of special interest. For instance, Promwad Innovation Company has had some valuable experience in this field. In 2011, Promwad experts started a project for designing a rather unique product for the Eastern European market, an open SDR platform for the development of multi-standard wireless communication devices (Fig. 1 as shown above). This article will discuss this particular product.

What is so unique about this project? First of all, it is uniquely open for developers. It is a platform that companies can build their products on, using both supplied software and their own developments. This platform can be used for developing transmitters for standards such as DVB-T, DVB-T2 (470–862 MHz); access points and base stations for the standards 802.22 (470–862 MHz), LTE (791–862 MHz, 1710–1880 MHz, 1710−1880 MHz and 2.5–2.7 GHz); radar stations, debug and laboratory stands in educational institutions and more.

From the developer’s perspective, a state-of-the-art SDR platform is basically a fully configurable system including an antenna, a digital processing unit with a minimum number of analog high-frequency components, low power consumption and, ideally, an unlimited frequency range. This architectural solution allows the developer to adapt and customize the device according to the problem to be solved, eliminating unnecessary elements and adding necessary ones. In this case, all efforts will focus on improving the software, while the hardware remains unchanged.

From the customer’s perspective, an SDR platform is a multi-standard device that is capable of working in any network with minimal settings, without the user’s help. The developer’s and customer’s interests meet in a multi-standard device that works in different communication networks and helps programmatically change a variety of features, from RF parameters to supported communications standards and protocols. When creating a device that would meet all of the criteria, Promwad developers had to face the problem of finding a balance between the performance and cost of the platform. The problem was that the selected functionality and the tasks of the device set a high bar for resources needed. In this case, an assessment of the system resources was based on the need to implement digital signal processing methods: direct and inverse Fourier transformations, the Reader-Solomon codes, LDPC, Viterbi transformations, linear prediction, etc., as well as software support for various standards. So the analysis and selection of an elements base was performed simultaneously to the engineering of the device architecture.

As a base model, developers considered the classic architecture of an SDR device including a transceiver which outputs I / Q signals, and a digital processing unit. RF path requirements were created on the basis of an analysis of existing communications standards, digital TV and radio frequency identification. Hardware support for the 802.11 standard was purposefully not implemented because its implementation on the platform does not make commercial sense. In addition, an important consideration in frequency range shift to the lower part of the range is the best signal propagation in urban areas, as well as long range, compared to high-frequency signals. Figure 2 shows a relationship between the attenuation of the signal and its distance for the frequency range of 300 MHz (top) to 3000 MHz at a step of100 MHz, which shows that the signal attenuation difference at a distance of 2,000 m is about 40 dB for the frequencies of 300 and 3000 MHz. 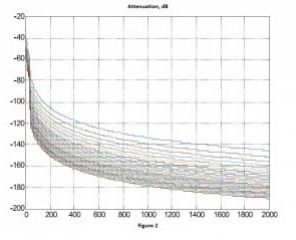 Based on the required bandwidth, the experts selected a two-channel ADC by Texas Instruments (14 bit, 250 MSPS), which features excellent dynamic performance, high speed and low power consumption. Inverse transformations are performed by the DAC3283 (two-channel, 16-bit, 800 MSPS). The function of primary signal processing and controlling the RF parameters of the transceiver tract is performed on the FPGA. Also, after an analysis of resource distribution in the system, PHY-level tasks were transferred to the FPGA, according to the OSI model.

The developers also analyzed the application of both a GPP processor (ARM DSP) and a high-performance DSP processor, to provide support for the MAC level of the stacks of various communication protocols, as well as support for peripherals and traffic flow generation. In addition to TI processors, specialized Freescale solutions were also considered. Finally, the developers selected the four-core DSP processor TMS320C6674c, each core with a frequency of 1.25 GHz, which was explained by the excellent performance of the processor, as well as a good level of technical support on the part of the developer company. It should be noted that the TMS320C6674 processor supports the high-speed SRIO interface, which provides the best solution to the problem of inter-board connection and integration with FPGA, as well as Secure Accelerator Engine, part of the KeyStone processor architecture. The communication channel can be tightly closed on this architecture, which is extremely important for transmitting confidential information over wireless networks (which is virtually all information that affects, directly or indirectly, any aspect of our lives).

The SDR platform now finds its application in a number of fields. MESH, SMARTGRID, SMARTANTENNA, MIMO, RFID, WRAN, DVB, DRM and LTE is just a short list of areas where this technology is now being effectively introduced. The platform developed by Promwad will also surely find its field application because it will help successfully solve major problems related to equipment upgrade, such as time, costs and risks. It used to take two to three years to design and manufacture products of such a class from scratch, while now it can take six months to one year to design a new device based on the SDR platform.