Use of NetBSD with Marvell Kirkwood Processors

This article provides an overview of NetBSD and highlights its differences from other operating systems of the family. It also briefly discusses the implementation and configuration of device drivers. The author studies an example of using this operating system, as an alternative to Linux, on the IP-Plug.

NetBSD is an operating system which represents the BSD family, along with OpenBSD and FreeBSD. Originally, BSD (an acronym of Berkeley Software Distribution) was a combination of patches and utilities for Bell Labs Unix, which evolved into an independent system. The source code had two licenses - Bell (because the company owned the larger part of the original source code) and BSD proper. After a while, the team of BSD developers broke up and the BSD project later received a new incarnation as 386BSD, an architecture i386 port. Eventually, the BSD family broke into three branches: NetBSD, OpenBSD and FreeBSD.

Each of the three systems is unique in its own way, but they all have a lot in common. The key feature of NetBSD is multi-platform support. The developers’ slogan was: “Of course, you can run NetBSD on this platform”. Developers have applied for registering 53 architectures, and the number of supported machines continues to grow. Meanwhile, NetBSD remains just as safe and high-performing as its “family members”, OpenBSD and FreeBSD. NetBSD was first officially released in April 1993 and had the version number 0.8. Today’s latest version is 6.0.

We should especially mention the advantages of a BSD license. Unlike Linux GPL, a BSD license helps in every possibly way modify the source code, change file names and distribute the final product provided we mention the author’s name.

NetBSD source codes are accessible through an FTP server as tar archives or iso images. You can also receive any version of the system out of the cvs repository by referring to the release name tag. The source code tree includes a kernel code (sys directory), utilities (bin, usr.bin, sbin, usr, usr.sbin, gnu), a cross-compiler (tools), the build script build.sh, as well as relevant libraries and documentation.

Let us discuss the system assembly process using the example of the IP-Plug plug computer. This multi-functional mini-server was developed by Promwad engineers by the order of AK-Systems. It is designed for solving a wide range of tasks in IP networks and can perform the functions of a computer or a server. The IP-Plug is powered from a 220V network and has low power consumption, as well as a small size (which can be compared to the size of a mobile phone charger). 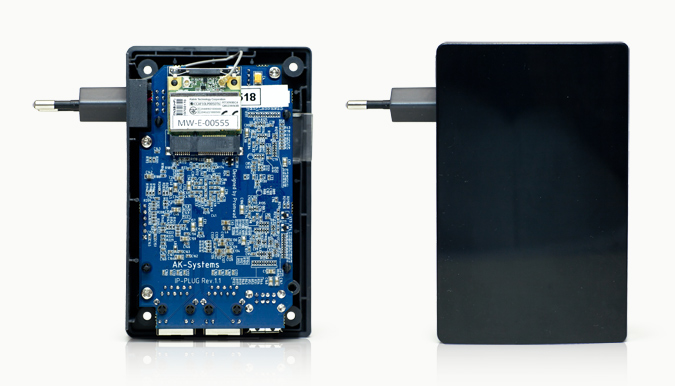 This device is used for measuring computing network parameters, data storage and transmission, as well as routing. It can also be used as a Wi-Fi access point, a file server or a DLNA server. The range of tasks performed by the computer is extended through software modification.

The IP-Plug uses the Marvell 88F6282 processor, ARMv5TE Kirkwood architecture series. Its support has been added to the NetBSD distribution since July 2012 and represented by files in the directory sys/arch/evbarm/marvell:

The drivers of specified peripherals are located in the folder sys / dev / marvell and are compiled to conform to kernel configuration.

We can use the configuration of the Sheevaplug kernel as a basic configuration because its processor and peripherals are identical to those of the IP-Plug.

All devices in the system are represented as a hierarchical tree-like structure described in the ioconf.c file (generated out of kernel configuration). The root of the tree is a fake root device to which all other devices are connected. The first root child for our processor will be the mainbus which connects the ARM kernel and the peripherals (see Figure 1).

For example, the implementation of the Ethernet driver is represented by the files if_mvgbe.c, makphy.c and mii.c. Its configuration is shown as a tree in Figure 2:

Figure 3. Configuration of the Ethernet driver in NetBSD

and represented as follows:

Because each device has a universal interface, tree traversal is performed at kernel startup, while successively calling the functions attach / match to initialize each of them. This results in system configuration (this process is called autoconf).

After editing the configuration file and building the kernel, let us proceed to the next step.

By specifying the parameter distribution for the script build.sh, you can build a full-functional root file system with all system utilities. But if you specify the target release, all programs will be grouped into sets and packed in respective files (base, comp, etc, games, modules, etc.). Unpacking only two sets, base and etc, helps receive a minimal root file system. By placing the archive contents on NFS, you can configure the NetBSD kernel to connect it as rootfs. To do this, it is enough to add to the configuration:

Now, the built kernel will automatically mount the specified resource as a root file system.

By changing the device in the config line you can start a rootfs connection from any of the supported devices. If the file system is not mounted for whatever reason, the kernel will ask you to select a new boot device and a file system type on it in interactive mode.

NetBSD allows for the possibility of mounting both ready-made packets and self-assembled packets. To install binary packets, you just have to run pkg_add specifying the packets name mask. The archives of packets and dependencies will be downloaded from the FTP server and unpacked. To receive information on the installed packets, you can use the pkg_info utility. To remove it, run pkg_delete.

When building packets from source codes, you need to download and unpack the pkgsrc archive that contains the bmake utility and make packet files sorted by the category. The list of all packets with a brief description can be generated by the command make readme.

A complete manual on managing packets is located in the directory pkgsrc/doc.

High portability, sufficient ease of use, as well as the necessary software packet and an open source code packets and open source make NetBSD a very attractive operating system for use in embedded systems. As seen in the example, it takes quite superficial knowledge of the system architecture and minimum change in the code to run NetBSD on the IP-Plug. At the same time, the functionality and performance of the built operating system is not inferior to that of Linux, which is used by default.